Nicole
Port Dover, Southern Ontario, Canada
I'm a needlework designer, and I love my job. :) I have a 20 year old son, who is also a needle artist, although he does his work on skin rather than linen. He's a tattoo artist. He's very talented, and I'm very proud of all his hard work. And I have the absolute most wonderful boyfriend on the face of the planet. We met 10 years ago online, and after 2 1/2 years of talking we decided to make a go of it - and we've never looked back. He's funny, charming, intelligent, hard working, and just an all round great guy. Not to mention he's gorgeous - AND English. :)

Promote Your Page Too

It's become a tradition. Every year I do some sort of unusual band sampler for the fall Online Show which starts tomorrow. The past two years have been two of my my most popular designs, the diagonal Twisted Band Sampler and Twisted Rainbow Sampler. This year I wanted something a little different, and my friend Esther gave me the most incredible idea.... so I introduce you to Esther's Waves. 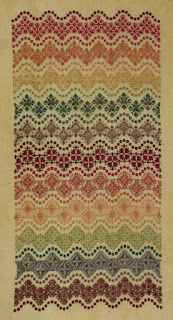 It's stitched in 11 lovely autumn tones from Dinky Dyes and a multitude of Delica beads on Stephanie's Honey Amber linen and will be featured on the Dinky Dyes page in the show for shop purchases. There's also a cross stitch only version for those who prefer aida. :)

Both are now up in my Etsy shop if you prefer PDF format.

I've been working with a few dyers on different conversions to different colour schemes. Both Thread Pickerz and Fiberlicious have worked up some beautiful colourways. LOTS of yummy colour ideas!!

I've already started on sketches for next year's edition, because my hubby's OCD went off the charts when I released waves done in autumn colours. It's already got a name... Ocean waves... and as you can imagine, it'll have lots of blues, aquas, turquoises and greens.

I've started on my next model as well... the next installment in the Celtics called Celtic Flutter. It's all done in purples (very yummy purples) and beads and crystals and butterflies and dragonflies. I know I already did Celtic Wings, but this one is very different! I promise!